A coming of age story set in the waning years of rule in Nazi Germany, Jojo Rabbit follows young Johannes (Roman Griffin Davis) and the relationships with his rebellious mother, the young Jewish girl hiding in the attic and his invisible friend and motivating confidant, Adolf Hitler. 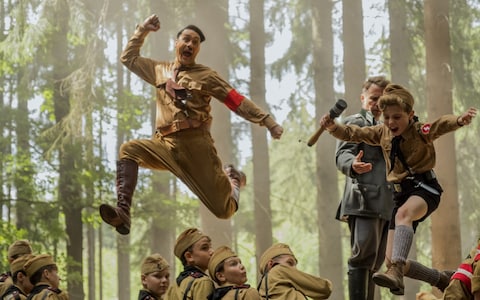 There are certainly moments of darkness in the film, the true horror of the situation can’t help but push through the playfully subversive tone, but for the most part it plays as a cross between Moonrise Kingdom and Drop Dead Fred. The comedy is constant, propelled with flare by writer director Taika Watiti himself as Jojo’s goofily imagined version of Hitler, offering encouragement when he has no-one else.

Living at home with his mother (Scarlett Johansson), Johannes wants to belong to something and so becomes a fervant fanboy of the Nazi party – Hitler and swastikas adorn his wall like band posters. A member of a Nazi youth camp, headed by a literally and figuratively resigned Captain Klenzendorf (excellently played by Sam Rockwell), here he will learn how to hunt Jews and use explosives. That is until an accident has him thrown out, reduced to a position that has him spending more time at home where he makes the ideology shattering discovery that his mother is hiding the enemy (Thomasin McKenzie).

Led by his ardent but naive enthusiasm, Jojo knows that he can’t risk endangering his mother, and so decides to interrogate the intruder and learn all that he can about the Jews, how they have tails and sleep upside down like bats.

Although there is a deep and truthful resonance with how Nazi propaganda dehumanised Jewish people, the film cleverly refocusses this mythology to be spouted by a prepubescent boy, mocking the absurdity of it all and usurping the power of these historical villains.

Waititi is continuing a precedent set by Charlie Chaplin almost a century ago when making The Great Dictator, stating that “Hitler must be laughed at”.