A conceptual music documentary that follows Nick Cave on the supposed 20,000th day of his life as he reflects on the past and ponders the meaning that he finds in performance.

Through a number of constructed set-pieces, the film frees itself from the duty of capturing authenticity and presents instead something more fitting of the Melbourne-born, now Brighton-based performer. And though Cave has many strings to his bow by way of his music, poetry and writing, he says that he can’t act. Perhaps it is this quality that gives the film a sense of realism without the need of shaky hand-held cameras.

Interviewed by a psychoanalyst on a set, under lights too bright, Cave remembers his father and reveals his biggest fears, namely: losing his memory. This set-up – a staged performance – is fitting of Cave, managing however to capture an honesty, which also explains the purpose of this documentary. The film seems to be an attempt for Cave to capture the past, to reflect on his purpose in performance, or in life perhaps, all captured in this dreamlike construct that appears at once self-aggrandising and self-aware – a humorous angle on the inevitable pretension that usually follows an artist talking about their art.

The fictitious day in which Cave journeys into the past and has happenstance meetings with old friends (Ray Winstone, Kylie Minogue among them) whilst driving his black Jaguar XJ, is fitting of the performativity that Cave talks about so passionately. At one point he reads from an old diary that contains rants about the weather of bleary old Brighton. He says of these writings that they are based on truth but ultimately a lie; a dramatisation. Following this, it seems that the film too is fantasy. One which is personal enough to reveal his thoughts on the transformative power of performance, but without ridding of its potency or tarnishing the image that he has come to embody.

A buddy cop bromance with two guys pretending to be cops but careful to clarify that they are manly and heterosexual at that.

Ryan (Jake Johnson) and Justin (Damon Wayans Jr.) are bickering thirty-year old friends, afraid of going nowhere until they find themselves in police costumes at what turns out to be a masquerade party. Turned out onto the streets they stumble upon the power that apparently comes with a uniform and enough self-belief. Ordering people to do as their told and with hordes of loose women throwing themselves at them, the allure of being policemen is hard to give up. Evidently: with great power comes no responsibility.

Ryan seems to find his purpose in life and so commits to the role buying a cop car and all the appropriate accessories from eBay. Adopting the role fully and dragging along his friend in order for him to man up and be more assertive, the two end up in easily avoidable trouble with some frighteningly typical Russian villains.

A lot of the story and the characters are cartoonish, a point which is restated with constant physical comedy. The cocksureness of Ryan is the catalyst for all the action in the film whilst Justin is relied on for comic relief: playing flamboyant for laughs with funny voices and effeminate tendencies until he is told to man up; or rather be less of a bitch. The homophobia underlying this central message makes the misogyny seem like an affectation of the film, and not simply the characters – which is worrying.

The film doesn’t ask to be taken seriously. That much is clear from the trailer or the title even. So if you can divorce yourself from seriousness and maybe a sense of morality, there are some laughs to be had. And a lot of two guys slapping each other.

Having adopted a deconstructionist approach to watching horror films so that they would no longer scare me, I had accidentally affected the way that I would watch all kinds of films by proxy. In trying to protect myself I had accidentally broken this readily available form of escapism. In one sense at least.

As time passed, I found myself growing fascinated with cinema and its inner workings – when it came to choosing subjects to study at college I was sure that I wanted to learn about human psychology to learn about persuasion and study marketing so that I could understand the influences of advertising. I studied Film as an additional course, but soon dropped another class so that I could take it full-time alongside extracurricular world cinema. Everything else became secondary. And though I couldn’t lose myself to a story, by believing it’s characters and being taken into the world created through sight and sound, I would be immersed in a different sense, amazed and engrossed by the processes of cinema. For this reason I feel like I am separated from a true experience. As though there is a barrier between me and the transporting fantasy on screen. I feel like a robot fascinated by love – interested in the mechanical elements, how the pupils dilate and the lips redden, able to understand the functionality but never able to feel it. At least not without being conscious of the fact. 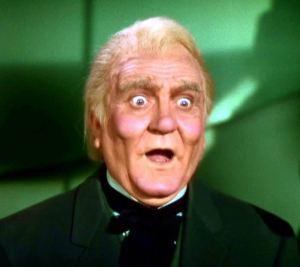 It would take me a while to understand that my own personal fascination with how things worked, how film and television had their own methods of persuasion and manipulation, was not shared by others. I assumed that others would be taken by the methodology at work in things that they saw everyday. I had glimpsed behind the curtain and was excited to share my knowledge, unaware that most people were happier believing in the wizard. Excitedly I would dissect the reality shows that my mother enjoyed watching. ‘That stranger in the crowd is mic’d up. How did they get a camera inside the house before the crew turned up? There’s only one camera, the interviewer is nodding at no-one right now.’ I couldn’t understand that they were better off than me, where I knew there was just a bloke and a machine, they had magic. I had assumed that, like me, the more interesting part of a magic trick was in working out how it was done. This was the appeal for me, and so I would never truly appreciate the magic of cinema in the same way as others.