With ‘Space’ being the boy’s theme of the month, and his night with me coinciding with the lunar eclipse, I’d set up the evening: geared up for a 5am wake up so we could see it at its peak.

Before bed we watched footage of various planets through my projector – laid out on my bed as they filled the wall. With his shadow he would point out craters, genuinely gasping and speaking with hushed awe as they grew in size.

I used a rather ropey star-gazing app, with an unmuteable cosmic soundtrack, to see the constellations above the house. Of the few directly overhead, he took a liking to Taurus. One by one he would prepare the double-sided stickers on glow-in-the-dark stars and I would place them on his ceiling in accordance to their position in the night sky above. Laid down to sleep, I told him we would be up early to see the Super Blood Wolf Moon – the name being enough to secure his excitement.

At 2am he calls out for me on the monitor. I dash upstairs to find him with his lamp on, sitting upright in bed wide-eyed: ‘Blood Moon!’ I explain that it’s a little early and take him down to my bed until it’s time.

At 5am I check outside and find the pale red moon over the tall silhouetted trees, and find the right vantage point. I wake the boy, excited but tired, and wrap him in one of my hoodies before carrying him outside. The full E.T look complete when he points to the moon.

Yes. Yes you can.

Recently, the boy’s mother and I finalised the top three school picks for September.

The number one slot went to a Scandi-utopian dreamschool that has child lead lessons and classes so small that he would get more focussed attention than he could possibly crave.

The gap between this and the second school is quite significant, considering that last year it failed it’s Ofsted Report when on the day of inspection an unqualified principal was standing-in whilst bullying was apparently omnipresent, one child even pushed down the stairs that day. So this is the fun choice, one to keep the boy on his toes like, which might give you some idea of our third pick…

That’s a little unfair. Since the incidents of above, the school was taken over by an academy and so there is a lot of funding being pumped in along with new personnel and close attention being paid to problems of the past.

Still, nothing on the nirvana of numer one.

Considering the criteria: that priority goes to children with relatives at the school, or if they have a challenging home setting, or proximity within the catchment area – it looks improbable that our boy genius will get to swan about reading poetry with his cohorts in option one.

This realisation was a little hard to take, and when Jman’s mother started to worry, I offered consolation by saying that it’s down to what we do with him anyway, the amount of information, attention and stimulation we can give him.

Within the week she had devised a plan, to make a theme for each month in which he would learn about a certain subject at home – theming activities, trips and even food to involve and educate. Learning about the north and South pole over Christmas, he will proudly list different species of penguins and their behaviours. Smarts that, paired with some training in basic gracie jujitsu, will at least make him Lord of the Flies in option two if it comes to it.

This remake of French hit Intouchables, stars Bryan Cranston as Phillip, a wealthy paraplegic looking for a live-in life auxiliary apparently in the shape of Kevin Hart’s Dell, a straight-talking ex-con with problems of his own.

The unlikely pairing stems from Dell thinking he is applying for a janitor position, and Phillip growing tired of the coddling over-sensitivity of the other candidates. He offers the job on the spot despite Dell’s apparent disinterest and lack of professionalism, or likely he makes the offer for these exact reasons.

Whilst disability, race and class are all inextricably linked to the central relationship, which is based on a true story, it feels unbelievably superficial. They exchange taste: classical music for soul, theatre for smoking weed and visual art for sex workers, and all of this amounts to a throwaway laugh. It ends up stuck in a strange place of not being able to be as funny as it could be, and not having anything meaningful to say. The clinky-clanky score intended to keep things light and frothy becomes a patronising distraction and serves to make the film feel utterly televisual.

Cranston is perfectly fine, and Nicole Kidman has a bizarrely underused background role as Phillip’s assistant. Hart is given some emotional depth at the cost of his usual heightened comedy, which makes you appreciate the charm of Omar Sy from the French original made back in 2011, and the on-screen rapport that he had with François Cluzet’s Phillip.

One impressive change from the original is that it allows Phillip a blind date, in which things grow uncomfortably real as she becomes overwhelmed by his disability. Although this grounds the more serious themes of the film, it’s late appearance leaves no time for resolution and makes the ending fall flat.

This remake accentuates the weaker parts of the film, in it’s artificial set-up and saccharine sentimentality, and lacks the charm of its original cast, ending up inoffensively mediocre.

From absurdist Yorgos Lanthimos comes another blackly comic farce but this time in the shape of a period drama. Following a grieving and gout-ridden Queen Anne (Olivia Coleman) and the two women vying for her attention, this story is sort of based on actual relationships, but it is certainly not to be mistaken for a biopic. 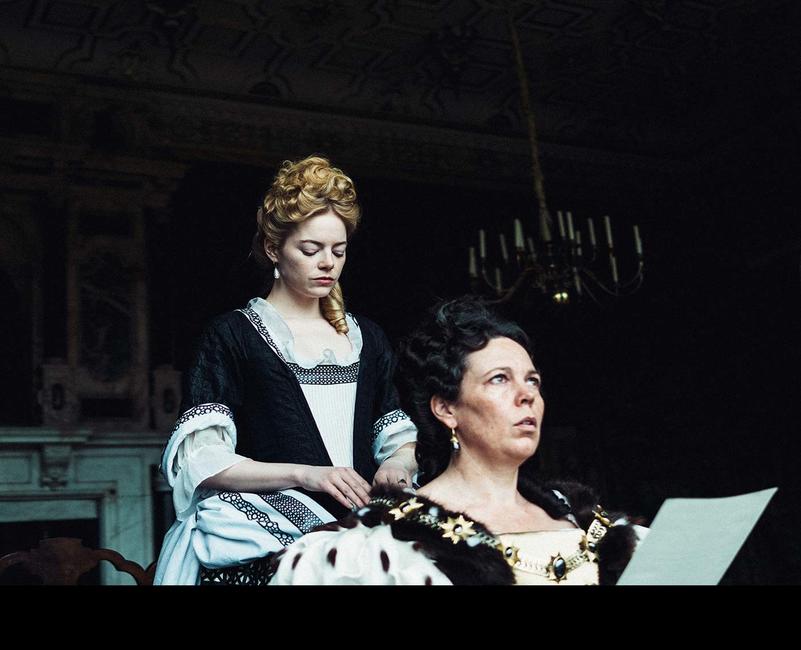 Known to fabricate a wonky realism within his films filled with strange rules and stilted dialogue, this period set film could be seen to provide both and perhaps this is why Lanthimos’ stylings come out in different ways. There is in fact a more contemporary physicality and language, though it is the brazenly graphic nature that is likely to cause a stir among unsuspecting audiences. This is the first of Lanthimos’ films that he did not write himself, but what it retains is his dark absurdist slant and sly humour.

The comedy is bigger and more obvious, tilting into farcical but shaded with tragedy. The customs and practices of the period become a playground in which Lanthimos is able to poke fun: a formal dance embellished with nonsense or aristocrats jeering violently over a duck race.

The film sees Abigail Hill (Emma Stone) arrive at the palace a servant, apparently having fallen far since she was a lady. Sharp tongued and quick witted she is cunning, with an understanding of politics and favouritism that could mean the difference. Abigail is our very own Barry Lyndon, intent on climbing the ranks into the Queens favour and perhaps even her bedchambers, much to the dismay of Lady Sarah Churchill the Duchess of Marlborough (Rachel Weisz), confidant and secret lover of the Queen.

A battle of wits commences between these women, manipulating the childishly capricious Queen to benefit themselves, and perhaps even to the detriment of the country which is fighting a war in France and running low on funds.

Marlborough has a history with the Queen, which allows her brutal honesty and befits her hardened demeanour. But Coleman and Stone, both with their big glassy eyes, are masters of reaction, a close-up of either is able to change the mood of a scene, to show a level of deception or reveal cause for empathy.

With politics reduced to squabbling, and with sharply written swearing it feels more like the recent The Death of Stalin than anything from the genre. This is by far Lanthimos’ most accessible film and bound to invite a larger audience, for some to be won over and for others to be offended. Undeniable though, are the powerful and hilarious central performances of these three women.