From Kurt and Courtney to Biggie and Tupac, I find Nick Broomfield’s documentaries about musicians to be cold and removed from the artist. Maybe it’s his intention to focus on the death of a musician without muddling in their music or achievements, but it comes across as cynical and leery, in a tabloid journalism kind of way.

The Cobain documentary Montage of Heck and Nick Cave’s 20000 Days on Earth both took on the style of the artist they were exploring and added a dimension to their story that was both befitting and engaging. Asif Kapadia’s Amy was so invested in the talent of Amy Winehouse, it showed such reverence for her as a musician, that you believe the filmmaker experienced the tragedy. By comparison Can I Be Me is a fleshed out Daily Mail article, but with exclusive interview access and archive footage as opposed to just peering through the window of the crime scene.

Using these resources Nick Broomfield attempts to explore the complicated and conflicted life that led to Whitney Houston’s death in 2012. 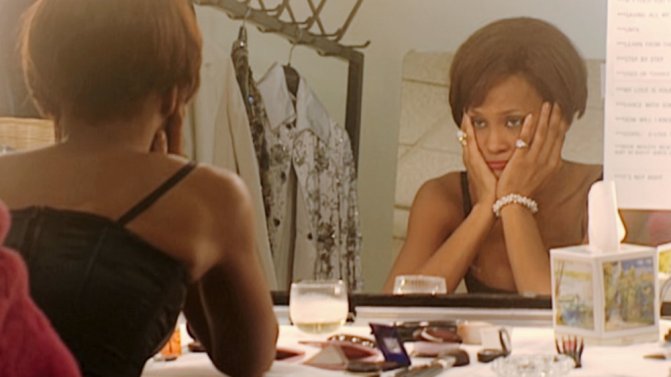 Showing her humble beginnings singing in church as a child under mother Cissy Houston, we see the stunning talent and huge voice that Whitney possessed at such a young age. Arguably pushed by her mother, Whitney was then carefully moulded into an international megastar.

Coming from a rough neighbourhood in New Jersey it seemed that in order to market Whitney to a white audience her past was painted over. Her songs would be stripped of their soul – taking out any gospel or RnB that could be connected to her culture. Still she was the first black chart-topping popstar and it is perhaps because of this that she was seen as a sell-out to the black community at the time. Whitney’s moment of realisation came at the 1989 Soul Train awards, where she was nominated for an award but booed as soon as her name was announced. According to friends, Whitney was very sensitive and self-doubting and this seriously affected her, only to be made worse by her eventual husband Bobby Brown who she had in fact met at the same awards show – a bad omen overlooked perhaps.

Broomfield finds conflict in many areas of Whitney’s life that could all in some way be contributing factors to her eventual overdose. From her addiction to various substances but also those things in her life that drove her toward them: the way in which she had to compromise her talent and was rejected by the black community, her relationship with her husband and the breakdown of her relationship with close friend and rumoured partner Robyn.

In the brief window of home videos included in the film we get some idea of the real Whitney Houston off stage as fun and darkly funny. So when you see her appearances on talk shows, where she is more careful and considered in how she presents herself, she still appears earnest.Whilst the documentary tries to cover all of the conflicts present in Whitney’s life, it comes across highly speculative, and with so little time acknowledging her talent or achievements, quite cynical. It is the charm of Whitney Houston that carries some warmth in the film but ultimately underlines its tragedy.