Now that you’ve finally caught your breath after its intense first series, the brutal Italian crime drama Gomorrah is back where it left off, plunging deeper into the darkness of the Comorra drug wars.

By the final episodes Ciro Di Marzio (Marco D’Amore) – the closest we have to a protagonist but one that we must keep at arms length for fear that he might betray us – had tipped of the police to have Don Pietro (Fortunato Cerlino) incarcerated, ordered the death of his wife and shot his son in the face. This climactic finale would seem to mark the end of the Savastano clan and the beginning of a new era, but with Pietro escaping prison and son Genny (Salvatore Esposito) showing signs of life, we don’t think for a second that it will end happily ever after.

Gomorrah looked at the destabilisation of power in the underground crime syndicate of Naples using anti-hero Ciro ‘The Immortal’ as a catalyst for change. The focus then turned to a new generation, the alley kids ushered in by Genny Savastano, who have no code or care for anything other than success and survival. In this second series we see an attempt at stabilising, the forming of alliances and forging of a different leadership style. But just as the first series we will see that those living outside the law aren’t too fond of following rules and there are always those hungry for more.

Gomorrah is far from romantic. It houses a viciousness that keeps you at a distance whilst compelling you to watch more if only out of a sense of masochism. The wars of this criminal underworld play out as a bloody game of chess. Each clan is comprised of members with animalistic attributes, each with their own cunning and flaws, devising plans to either seize power or uphold an empire. Don Pietro flees to Germany at the beginning of the series to think over his strategy, to assess the board before making his next move. Whilst he takes a back seat to the action, the streets are still plagued with internecine bloodletting and the paranoia is inescapable. There are a few slower episodes that catch us up with certain characters as it skips forward in time but this is relative to the show which is full-throttle and unrelenting for most of its runtime. 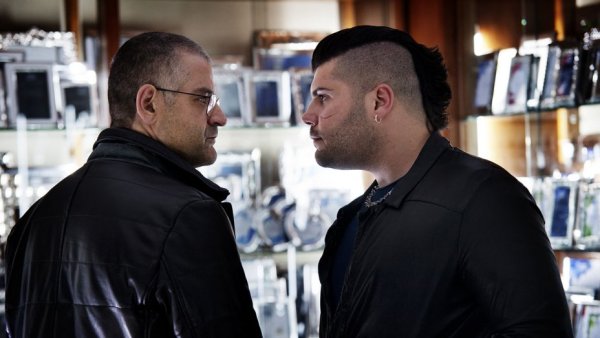 Collecting accolades and comparisons to the most critically acclaimed programming, you can see elements of many hit shows but Gomorrah has a unique mesh of these qualities. You can see The Wire in its stark realism and focus on the logistics of the drug trade. With their own nuances they are fully realised and revealed to the audience: both adapted from exposes and written for the screen by their authors, in this case Robert Saviano, these are the real criminal underbellies of Baltimore and Naples respectively, and the details make that clear.

Where they differ is in perspective as Gomorrah takes a position firmly anchored in the dark side. The police are talked of but rarely seen. We have no clear ‘good guys’ and what’s worse is that it can take any character we identify with, or have empathy for, and pry them loose from their morality. In Gomorrah there is no recourse to anything lighter, no whimsical comedy to lighten the mood, its focus is the unrelenting brutality of a world that is usually glamourised in film and television. The constant and casual manner in which characters are killed off doesn’t stop you from being shocked though, it is presented as an inevitability that could be triggered at any moment so the tension is heightened throughout.

By the second series you do become a little desensitised by the savagery, which actually in some way helps you to identify with the cast of morally depraved characters,but you don’t want to get too attached to anyone as you know they could be killed in the next moment. Much like Game of Thrones, Gomorrah doesn’t hesitate in killing off characters – another harsh reality. But with an ensemble cast that grows in every episode you can see how this world works, how different figures come into the fore and have their time. The remaining alley kids from the first series will find themselves more engrained into the system, their rabid complacency adding a little more chaos to the mix.

I suppose that Gomorrah has been compared to Breaking Bad for its adrenaline-rush pacing and cinematic style, but the sheer scale of production and the quality of the stuntwork seem unmatched. In the very first episode a pedestrian is hit by a car in pursuit. This detail has no bearing on the story – if not simply the first time we are shown that bystanders don’t count for anything – but what is so striking is the way it is shot. The car speeds around the corner and the hooded man braces before there is a cut. In a lesser show there would be some camera trickery here, some camera shakes or close-ups to obscure our view, some loud sound effects and a hard cut to the person hitting the floor; only in Gomorrah do they cut to a birds eye view in which you see the victim roll up the car bonnet and into the air, towards the camera and back down to the ground in this breathtaking single shot.

There is a certain stylism at work here. With a handful of directors all aiming for continuity, they all contrast the solid gold interiors of the houses with the dank and dingy aesthetic of the streets. The images that stand out though are those that are larger than life, or rather are as large as life. If a house is set alight, there really does seem to be fire. Smoke fills the air and the paint on the doors bubbles and peels – it feels real, which makes it evermore threatening. Now that the Savastano’s have gone, rival clan leader, the quietly intimidating and ultra-religious Don Salvatore Conte (Marco Palvetti) is back in his home town, and in this series he will take part in a religious ceremony that is of an awe-inspiring magnitude – in hooded robes hundreds will walk down torch lit streets at night, chanting and self-flagellating. It has a beauty that comes close to magical realism.

Gomorrah recycles some similar ideas and remains locked onto ideas of trust and paranoia but this is an affectation of their world, a system which is doomed to be unstable from threat of police, church, civilians and those who want a piece for themselves. What this second series does provide is a more feminine presence, that is to say there are more female characters who are just as rich and complex as those we have come to know already.

Though not without flaws and not entirely free of cliches, what Gomorrah does so well is to maintain its momentum whilst quickly establishing new and interesting characters. At this rate it will never let up – so hold your breath once more and hopefully we’ll catch another break before the third series.