Stitched together from parts of writer director Rachel Tunnard’s life, save for the serious parts, Adult Life Skills is a piece of handcrafted whimsy that has heart and a whole lot of gags – that most of them don’t land doesn’t detract from its Northern charm. 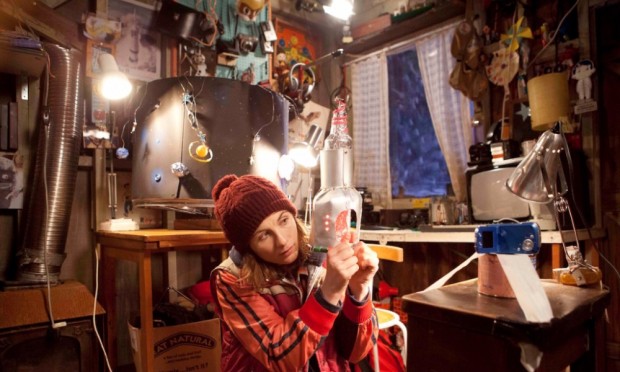 This low budget English film follows Anna (Jodie Whittaker) on the brink of turning thirty but still living at home with her mum (Lorraine Ashbourne), well almost – living in a shed at the bottom of the garden. This is her hideaway, adorned with pun-based signage (Right Shed Fred, Shed Zeppelin) and pictures of Patrick Swayze, where she makes internet videos of her thumbs for no-one but herself.

From her bobble-hat, bmx and back-pack it is clear that Anna is stuck in adolescence. She longs for the company of her deceased twin brother, and refuses to take life seriously without him. Anna remains a lonesome teenager and it is only when an old school friend (Rachael Deering) comes to visit, and as she spends more time with an outcast neighbourhood kid with an equalled sense of alienation (newcomer Ozzy Myers), that the full extent of her grief comes into focus.

Beneath her quirks Anna is shown to be stubborn, defensive and full of rage, which is well captured by Whittaker. The film comes off as a bit too cute and reaches too far for it’s dramatic moments- it is only in the fleeting moments with over-looked love interest, the soft-voiced but definitely not gay Brendan (Brett Goldstein), that the awkward comedy works. The funniest back and forth though, occurs between the crudely penned faces on Anna’s thumbs.

Adult Life Skills has charm but it feels empty and unrealistic, like Me and Earl and the Dying Girl but hollow and without the pathos. It employs the same staples of the indie-twee and ends up as nothing special, but it’s hard to dislike – a low budget effort from some female voices that deserves to be supported.

One thumb up, and the other eternally depressed.