When young Sage (Julia Garner) falls pregnant she turns to her feminist poet grandmother (Lily Tomlin) for help. All she needs now is $612 for an abortion which has been scheduled for later that same day, unfortunately grandma Elle is in the process of transmografying her life into art and has turned her credit cards into wind chimes. 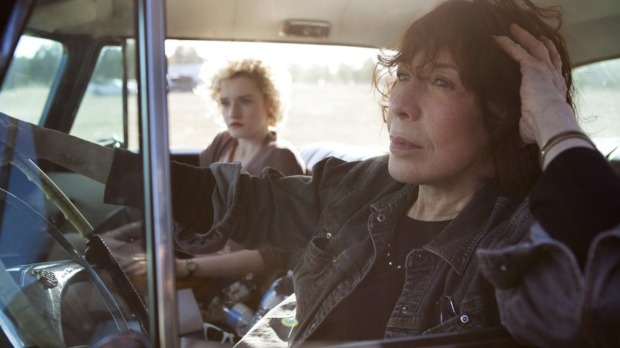 And so the once famous, or mildly well-known, Elle takes her granddaughter on a tour of old flames and affiliates aiming to scrape together the money. They drive around in an old black Dodge, classic in style but ageing and falling apart – the parallel with Elle will become significant on the home stretch.

Elle is sharply intelligent, an academic with rebellious bite. The first we see of her she is breaking up with her young girlfriend (Judy Greer) and as it turns out she can be pretty mean, a trait she almost takes pride in. Despite this, her attitude and cutting remarks are infected with her wry sense of humour.

Grandma is a road movie and an indie comedy, but not in the quirky Juno sense. It is funny throughout but feels somehow more sincere – although you can expect an acoustic score with shots of hands out of car windows rolling on the wind.

It’s not all light-hearted whimsy though, there is an emotional depth to Grandma which comes in a different shape than you might have expected – anti-abortionists are laughed off screen but true drama comes in the form of Elle’s ex Karl, played by a moustacheless Sam Elliot. Touching on their past and the cavernous changes in-between (she is a lesbian and he has a family that borders on an army) the incredible performances of Tomlin and Elliot hint at the complexity of their lives outside of the film.

A clever scene has the long and greying Elliot, hunched over fixing one of his many grandchildren’s play cars – a satire of masculinity, of men and their toys.

Grandma is a feminist film in that it represents strong women of all statures and not without their flaws, this is what makes Elle such a compelling character, she is fuelled by compassion but is openly imperfect.