As a wee nipper I was a big fan of wrestling. That is to say watching professional wrestling in the form of the World Wrestling Federation, for I possessed very little charisma at this young age and had no signature prop.. I had a snake named Jake in honour of the wrestler, but had no such moustache; I had a parrot named Colin after no-one in particular, but had no golden jacket. Though I was a child, a newly-formed and lesser-intelligent human being, I had started to wise up to the construct of wrestling and believing it to be fake my interest waned. My parents, quick thinkers as they were, taught me that wrestling was indeed fake but often enough it would ‘go real’ when someone pissed someone else off or something. So I would be sitting watching casually when my dad would announce ‘It’s gone real! It’s gone real!’ I would leap of the sofa and stand in front of the television transfixed, watching these actors really go at it, fighting within the fight. 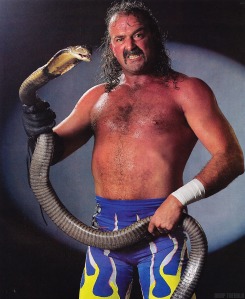 I still watched wrestling for many years after, even when I knew it wasn’t a real undertaker with a real grudge against his real half-brother. I watched it for entertainment. It was hyper-masculine dramatism akin to theatre within a sports league. Characters in costumes each given a narrative to follow, a path to tread that would lead them to be supported by or taunted by the crowd: good, evil or underdog. An operatic UFC. In some ways boxing appears to tread this same line. The drama that surrounds the fight can become the focus, from tabloid fodder to pre-match hype that may simply be promotional but appeals to our innate desire for story. I remember watching Audley Harrison’s supposed last fight with David Haye in 2010 (he has since announced retirement a few more times and is still fighting now), and watching the appearances on various shows that preceded it. The tensions seemed to rise between the two fighters as the animosity came out in trash talk. This lasted for eight months in total. Lo and behold, after the fight – stopped in the third round in favour of Haye – the two instantly became friends again. Haye then announced to the disappointed crowd that the rivalry wasn’t real.. it was drummed up in the hopes of getting people interested. The audacity of this fucker breaking the fourth wall well into the third act.

Searching around and all up inside the internet I find an archive of HBO Face Off, a show that features two boxers in an interview before their upcoming fight. With a suited referee as the interviewer, the scene is constructed to heighten tensions and coax out confrontation. It is pretty much an emulation of WWF (nee WWE) interviews, but with less grandiloquence by way of less cocaine maybe. Just in case the masculine posturing wasn’t clear enough, the three gents sit on backward facing chairs as their beefs are hashed out to metallic drones, cutting to close-ups on there brooding expressions. I watch an instalment featuring the showman of contemporary boxing Floyd ‘Money’ Mayweather Jr. Usually partial to a bit of taunting and showboating, he talks with unexpected kindness and respect for Miguel Cotto. Sitting across from him, his noncompliance is symbolised perfectly when at one point he stands to turn his chair around and sit like a normal person. 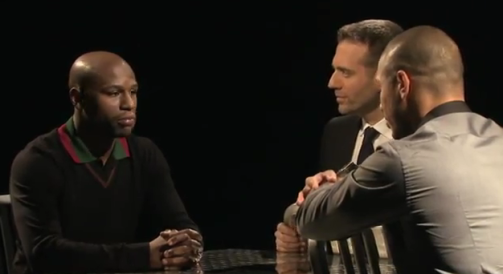 He makes mention of a 100k bet he has on a sports team to which the interviewer asks if flaunting money is part of his persona – alluding to a reference that Mayweather had apparently made himself, likening him to a ‘WWE fighter; a character’. To this Mayweather retorts: “When it’s lights, camera, action it’s time to give the fans entertainment. The fans want to be entertained.” It is hardly surprising that boxers view themselves in such a way, after all Muhammad Ali revealed that his boastful and antagonistic approach to boxing was inspired by the pro-wrestler Gorgeous George. 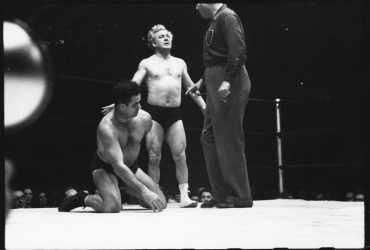 This is where boxing can take from wrestling – but when it comes to the fight itself, it is less of a show and more of a trial of strength. Roland Barthes commented on the difference between these sports in Mythologies:

This public knows very well the distinction between wrestling and boxing; it knows that boxing is a Jansenist sport, based on a demonstration of excellence. One can bet on the outcome of a boxing-match: with wrestling, it would make no sense. A boxing- match is a story which is constructed before the eyes of the spectator; in wrestling, on the contrary, it is each moment which is intelligible, not the passage of time. The spectator is not interested in the rise and fall of fortunes; he expects the transient image of certain passions. Wrestling therefore demands an immediate reading of the juxtaposed meanings, so that there is no need to connect them. The logical conclusion of the contest does not interest the wrestling-fan, while on the contrary a boxing-match always implies a science of the future. In other words, wrestling is a sum of spectacles, of which no single one is a function: each moment imposes the total knowledge of a passion which rises erect and alone, without ever extending to the crowning moment of a result.

Very distinct entities, wrestling and boxing require different attitudes and modes of perception – though it is probably these imitation games that confuse expectations. Staging is a vital element of wrestling though some don’t like to be confronted with this idea. In the brilliant documentary Beyond the Mat (1990) we glimpse behind the curtain of the WWF and see the foundation on which it is built, unveiling the development of characters and the necessity of showmanship, attaching symbols to people as they become icons within a mythology. Perusing the internet now I find a real ‘wrestlers gone real’ compilation (see below) made available by the ubiquitous mobile phone cameras that snatch at reality. A wobbly low-resolution reality. Now this sense of real violence enacted by professional stage fighters tares at the fabric of the constructed myth with a strange resonance. What’s funny is that within these leaked footage videos there is at least one that is faked. The ‘real’ videos then becoming another medium for the constructed mythology, expanding to reach an audience who are drawn foremost to reality by adding another layer. This decorating of the original medium plays into the denial of the viewer who craves reality – when instead what should be realised and appreciated is it’s non-reality, it’s purpose and intention that make it more than reality; a sum of spectacles. The same can be said for cinema: you enter into a film knowing that it isn’t real. You buy into the concept and, rather than becoming complicit in the lie, you equip an appropriate mode of perception that allows you to enter into a world that is fantasy, in which events are dramatically heightened. You pull the wool over your own eyes and volunteer to be tricked into feeling something, into relating to characters despite them being just that. But this is where the analogy falls apart for me. I could watch professional wrestling and enjoy it for what it is, but I find myself less able to escape into a film the more I become aware of the tricks and processes in action. I appreciate cinema the more I learn but there are certain barriers I come up against when trying to escape into a film. For instance the more familiar I am with the actor the less likely I am to believe the character. Even whilst pulling tears from me I will think: ‘Sean Penn is really convincing as someone with a developmental disorder’. No matter how good the performance, especially if it is a great performance, I will be one layer removed thinking: ‘George Clooney is doing a good job of playing the president’. I know that it isn’t real, but some part of me wishes that I could believe. Where I have the joy of knowing under which cup the ball is and how it got there, everyone else has magic.

This can’t just be the case for me. It is most probably why so many films are based on a telling of a once true story; however bastardised they end up, they appeal to truth in an attempt to satisfy a craving for reality. Perhaps this is the reason for the resurgence of found-footage films. Perhaps it is the same unsatisfied craving that has made reality TV the pervasive force that it is today – even if it is completely constructed.

What I have found is that foreign films and unknown actors appeal to my sense of escapism, but all I am doing is wishfully fooling myself. Other films I tend to like are those that subvert the frame and the processes in which they have been realised. Or highly stylised spectacles that don’t ask to be taken seriously. Or films that blur the line between reality and realism. Maybe what I long for is the moment when I can give up and believe, when I can forget all that I have learnt about film and just enjoy it for what it is, waiting to hear that voice in the back of my head that I heard as a child announcing: It’s gone real! It’s gone real!