Some thoughts on the structure of Nymphomaniac – sidestepping comments on some truly bizarre performances including Shia LaBeouf, whose accent genuinely provoked laughs from the audience I sat amongst.

With his tongue still firmly in cheek, Lars von Trier continues to try and shock audiences as he explores female sexuality in the early stages of a young nymphomaniac’s life – humorous for the first volume at least until it starts to run dry. Drifting from the more serious, though it certainly retains a level of dramatic darkness, von Trier plays with the audience as he his known to do and tries for shock so blatantly at points that it begins to feel like a parody of his own style. 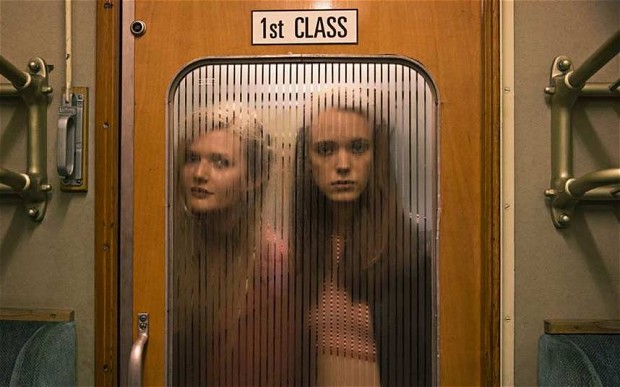 The crowd I sit with in this odd Friday matinee, while the sun shines bright outside, is made up of mostly guys on their own. A few couples and the odd scattering of fems but predominantly men on their own. I am one of them. Still this is strange – I feel strange. Whether through discomfort from the subject matter, or from the lack of give in the material of our collective crotches, there is a lot of shuffling between laughs. Alan Moore, author of graphic novel The Lost Girls which would perhaps fall under the self-same categorisation, has commented on the idea of ‘intellectual pornography’: that it is a difficult feat that has to fight for the blood to rush to either of the brains; that you will ultimately be stimulated on one level only. Men anyway. Us lone men fidgeting in the dark. So maybe von Trier has an alibi for the film not satisfying audiences intellectually…

What I found intriguing about Nymphomaniac was its place in the context of von Trier’s films as subverting the form of storytelling and preventing escapism.

Joe (Charlotte Gainsbourg) lies bruised and broken on the street when she is discovered by Seligman (Stellan Skarsgård) a fly-fisherman who has just bought some cake. He carries her to his house – it is here where she cleans up and rests in bed with a cup of tea. She decides to tell her life story that led to this point in time, from the beginning mind, using different visual aids in the room to chapter her story. Seligman in turn sits bedside as the sole audience, but more than this, as the ‘myth interpreter’. He listens to Joe with rapturous delight, taking deep interest and offering consolation; where Joe sees herself as sinful and worthy of condemnation, Seligman is fascinated and reflects on the meaning of her past through analogous parallels in literature and in nature. This is her confession that she takes very seriously, taking offence when Seligman finds humour in her story or worse when he feels sympathy for her.

There is an inherent self-reflexive quality in this narrative device – if we view Joe as Lars: the intentionally provocative storyteller who is intent on shocking and offending, and Seligman as the audience or perhaps more specifically fans of von Trier: watching with a sense of humour, desensitised and ultimately unoffended.

Joe and Seligman talk in stilted, awkward conversation that feels entirely unreal. Whilst he takes great delight in interpreting her tale through literary comparisons, Joe is not amused, instead focussed on telling her story. She talks in a soft yet somehow self-aggrandising tone, bitter that she is not getting the reaction she wants. This device continues to interrupt and overlay the story as voiceover while it is played out on screen for the most part by her younger self (Stacy Martin). Whilst Joe refuses to see humour in her actions, the audience who are aligned with Seligman may then also find her stories inoffensive and excusable, and resultantly find her stern self-importance distancing. I did anyhow.

As someone interested in semiotics I found myself relating to Seligman, looking for meaning and symbols and perhaps missing the point of the story. I enjoyed Seligman’s interruptions and how they would manifest on screen. In the same way that Joe’s memoir would play out to the audience, so too would Seligman’s interpretations which at times brought great comedic relief, even when they were not appropriate as deemed by storyteller Joe.

At times symbols would actually overlay Joe’s remembrances, in example: upon telling of the first time she had sex we see the number of thrusts counted in huge numbers on screen. The title of the film is in fact shown on posters and such with bracket symbols in the centre of the word, depicting obviously a vulva. Mea maxima vulva. Symbols are prevalent and this is impossible to ignore as your attention is constantly being drawn to it. It is as though von Trier gives voice to a story that is intentionally provocative whilst annotating the layers of meaning.

He is having his cake and eating it with an appropriate fork.

As if to say there’s more to it than shock value – he is simultaneously saying look at this girl loosing her virginity but also notice how there is meaning embedded into it as 3+5 are numbers in the Fibonacci sequence. He is saying ‘I’m not just shocking, I’m deep too and here’s why..’, so he never really leaves you to interpret anything for yourself. This device does take you out of the story. It keeps you, as Seligman, questioning the narrative and how you should feel about Joe. You become caught between the cross purposes of the two characters who don’t really seem to be talking to each other, and with constant interruptions you fail to get lost in the story being told.

As the first volume crept into the second, I felt there was an emphasis on the dramatic. But this once again felt like it was simply trying to shock. And already pulled from the seriousness it held less weight. It felt more pretentious, with out-of-place monologues from Joe and Seligman that presented arguments straight from the mouth of von Trier. Although interesting and well-made points – regarding for example the power of words and censorship in an overt nod to von Trier’s announced Nazi affiliation at Cannes – it felt like an excuse to make a point to the audience. Their entire exchange felt like this to a certain extent. Seligman’s observations made me realise that when I was focussing on symbolism of a film before taking in the narrative I would not connect with the story. In this case it achieved a great comedic effect at first, but took me out of the drama and left me nowhere.

Whether he intended it or not I felt a bit used after watching both films… the final moment pushing the film into ridiculousness. Von Trier doesn’t take himself seriously so I guess we can only expect the same from his films..