The Amazing Spiderman 2 sees the alliance of vengeful enemies, this on top of the continued unravelling of Parker’s family secrets and a complicated relationship with forbidden love Gwen Stacey (Emma Stone) but first.. graduation. From the off we are shown that juggling the social life of awkward and anxious Peter Parker against the wise-cracking Spiderman has its complications and are becoming near impossible to keep separate. 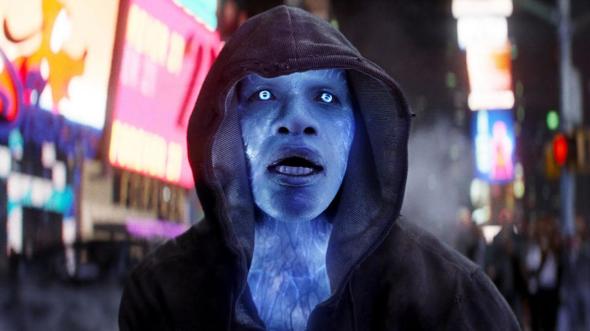 Garfield’s Peter Parker is a little more comfortable in himself since the first instalment though he certainly still shows signs of a neurotic, angsty young-adult. He can sometimes come across as conceited and slightly unlikeable, which is understandable really for a superhero.

Whilst Spidey is not without his faults, his soon-to-be enemies are acquaintances who seem to have their own psychological problems – their grudges spawning from their own fears and insecurities. Max Dillon (Jamie Foxx) an electrical engineer for Oscorp feels overlooked and unimportant: the faint whisper of the voice in his head accompanies pangs of social anxiety. This is until an accident leaves him with the ability to control and contort electricity, leading him to discover that creating chaos is rewarded with attention.

Initially idolising Spiderman for saving his life and actually acknowledging him when he was the humble Max Dillon, the now literal electrical engineer Electro has a sudden change of heart. Although Electro brings with him a cinematic presence his motive appears misplaced and sudden, feeling more like a connector to the far darker villain Green Goblin.

Dane Deehan’s descent from Harry Osborn the old school friend of Parker to the monstrous Green Goblin is commanding. A twisted performance that stems from Osborn’s fear of death upon discovering that he has a genetic disorder. As his illness takes over the threat becomes more horrific than spectacular, unlike Electro. The lighter, more comedic tone that the film invites can be misleading at times during these sudden plunges into darkness.

With so much going on Peter Parker seems to struggle with where his focus should be and where his priorities lie – just like the film which seems to spread itself thin and spend too much time away from the compelling characters and storylines.